Can You Solve It First?

A shriek is heard, death is dealt, bodies fall, and both the innocent and the guilty are gathered to ferret out suspects. Murder not your style? Our mysteries are gripping thrillers with or without bodies and are as varied in style as your imagination.

Through a specially written script, which incorporates entertainment with the goals of each group (corporate or private), guests will become fully involved in learning, performing, teamwork and problem solving while having fun. The story-line can be based upon history or fiction, occur in the past, the now or the future. The plot can thicken for one evening or over a number of days.

Guests search for a solution and keep track of clues, such as incriminating snapshots, torn maps and cryptic notes. Participants are invited to interrogate actors, form their own alliances, or simply look on.

A group could elect to use one of ITI’s existing murder mysteries, or an existing script could be adapted to meet the goals of a corporation or private group. These scripts are as follows:

The Detectives’ Club. You are invited to the annual meeting of The Detectives’ Club to see if you have the talent and skill to become a member. The current members are gathering to split the $5 Million in royalties from their latest, best selling book. They will swap stories and brag of their accomplishments. A few may get drunk and misbehave. As the evening continues, past misdeeds may surface. Under the terms of the contract, any of the detectives still alive at midnight will share the royalties. Needless to say – some do not survive. Mingle with the characters during the reception and ask them questions during dinner. Guests will have a multitude of clues and each team will complete a solution card before the end of the evening. A variety of locations can be used for this mystery.

The Daddy, the Diva, and The Detective. The Empress Donna Sachet (thirtieth elected Empress of the City) and the Leather man (Lenny Broberg, International Mr. Leather 1992) are our glamorous hosts. As our story begins a group of detectives gather for their annual meeting and plan to hold auditions for their next movie: A Full Bodied Bouquet. The guests are dressed to kill for this high energy evening which includes a costume contest, singing and dancing. The detectives want the guests to share stories from their own lives about the crimes they have solved and then the best stories will be adapted for a musical show. You name the venue and ITI will make it work.

The Legends of Sierra Gold. Summertime, 1924. The voice of Mark Twain has been haunting intrepid reporter, Nellie Bly since his death in 1910. During her famous around-the-world journey in 1890, Nellie met Mr. Twain while she was stranded in San Francisco during the great Sierra blizzard, which nearly thwarted her successful trip. As years pass, Nellie discovers that Mark Twain’s voice rings true. A time capsule exists which holds the answer to an unsolved murder and consequent transfer of a valuable gold claim. Legend has it that Snowshoe Thompson buried the time capsule in 1849 by Lake Tahoe. Unable to go further in her detective work, she has asked the descendants of the key historical figures to meet (in costume) for an awards’ ceremony, where she will invoke the people responsible for her haunting. However, the calm dinner is interrupted by many strong motives such as greed and jealousy. Bizarre events start to occur and there will even be a few murders! This mystery is best performed at a location in Lake Tahoe.

The Upper Downer Staircase- Can you play your part and survive?

This murder mystery is designed for 8 guests who play all of the characters. It includes a three course dinner in your private house using several rooms. It can also be done at a bed and breakfast, a small hotel, or even at the Victorian House on the island called East Brother Lighthouse. The script is psychological, high-energy, and zany. There will be some intellectual word games and puzzles which will help to discover the true identity of each guest and the criminal who is responsible for the devious acts and murder!

Before the guests arrive they will receive a short survey about their backgrounds, personality type, and their talents, such as: do they garden, cook, sing, play cards or Scrabble, and so on?

Then the script is edited to fit this specific group of guests. The butler and maid will assure that all written materials, props, and clues are prepared for the event. We will send each guest a short description of his/her character and what to wear and some items to bring with them. Once they arrive at the dinner the guests are each given very clear directions on what to do in small doses (via envelopes from the butler). This will allow each person to play the game without the need to memorize lines or rehearse beforehand.

During the wine reception the guests all mingle and strange things start to occur. Each person will try to make some notes and watch for clues. Soon it is time for the elaborate dinner in the main dining room. However, there are many interruptions and guests will get up and search for more evidence between each course. As the evening unfolds, each person will work to solve the mystery before they are killed off by the sinister mastermind. Before dessert each guest will get a solution card to write down his/her solution. After these cards are collected, the correct answer will be explained and the murderer will be revealed. 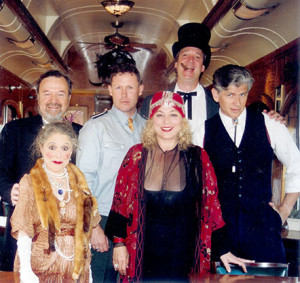 Murder on the Wine Train Express. The year is 1915. San Francisco has been reborn from the ashes of the Great Earthquake and fire of 1906. Under the vision of people such as D.W. Griffith, Mack Sennett and Charlie Chaplin, the silent film industry has taken off and revitalized entertainment. With the advent of a new railway, wine makers have discovered California’s Sonoma and Napa Valley Wine Regions and are building an industry they believe will someday rival the wines of France. This event is murder mystery theater and gourmet dining at its best. The event is an experience of “Real Life Theater” with the actors appearing as real people and not on-stage actors. The action occurs throughout the train. The actors move and will come to your train car during the reception and dinner. This mystery is best performed on the wine train in Napa.

Private events are best when designed for 8 close friends or 20-300 guests. Most events occur during a 3 hour dinner, but we can also write custom scripts for weekend events with several episodes.

Events for groups from 9-19 people we often suggest that you attend our monthly public mystery dinner Murder on the Wine Train Express.

Please use the request form below to tell us about your group.

Based in Northern California Working Globally